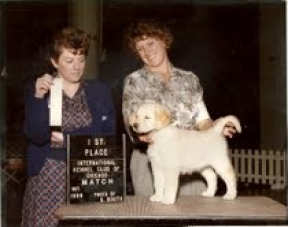 Our "Rosie" as a pup with breeder Sherry Thomas-Linker 1989 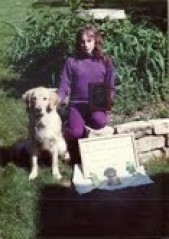 Myself (Lori) and Rosie after getting our CDX title! 1992

In 1989 my mother, Joyce Selof purchased our families first Golden Retriever puppy. We bought her from a very reputable breeder as well as trainer Sherry Thomas-Linker in Battlecreek MI. My mom named her Driftwood My Country Rose "Rosie" and she was to be my dog. I was only 10 at the time and with the help of my mom we trained Rosie and I got her CD and CDX titles. Rosie became the foundation for our breeding progam and was known as "Momma Rose" around our house. She passed away in 2003 but her legacy lives on in the dogs we breed. Around that time my mom decided to separate her dogs names from the Driftwood kennel we had originally bought from and she chose Rosewood Goldens after our beloved Rosie. That all took place in Lemont Ill which is 30 miles south west of Chicago.

In 2009 I, Lori Selof-Steck got married and moved to the Charlottesville VA area. With that change I decided to distinguish my dogs from my mom's (though I am proud to have the same bloodlines) so we sought a kennel name. My husband came up with the call name Breeze for our first pup we raised together. As well on our commute between Chicago and VA we pass a town called Breezewood so it just fit-Breezewood Kennel it is!

My mom, Joyce, passed away due to pancreatic cancer on Oct. 17th 2012. Joyce left a legacy of her unshakable faith, commitment to family and of course her love of animals and desire to breed great Goldens! At the time my mom passed away she had dogs she co-owned and had plans to go forward with breeding. She had signed those dogs over to me and I am happy to say we are continuing those lines!

In March of 2013 my husband, son and I made the move back to the chicagoland area and plan to stay near our home city from here on out! Currently we are living in Joliet. 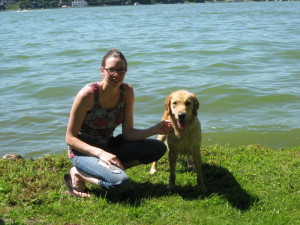 Some of our dogs

Please feel free to contact us with any questions!